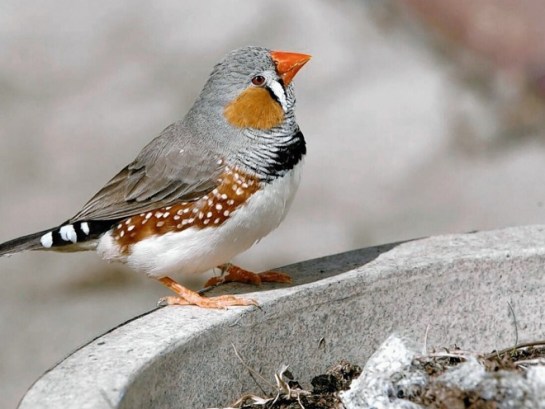 Neeltje Boogert, who led the study, said the research could have important implications for determining how populations respond to increasingly disturbed and variable environments. END_OF_DOCUMENT_TOKEN_TO_BE_REPLACED

What behaviors are learned and what behaviors are genetic? That’s a question that scientists have long sought to tackle. Now, they may have an answer to this question–at least as far as zebra finches are concerned. They’ve found that these birds’ brains and song structures are strongly influenced by the environment rather than just by genetics. END_OF_DOCUMENT_TOKEN_TO_BE_REPLACED

Zebra Finches are one of the birds that hold a trace of ancient hepatitis B in their genes. Photo: FurLined

Want to know something sad about the great-great-great-great-…great-great-great grandparent of all modern finches, weavers, crows, jays, robins and all songbirds? She was carrying around the genes of hepatitis B. The virus that today kills around 620,000 people each year worldwide, it turns out, is old. Really old. A recent study analyzing the history of hepatitis B found that the virus was going around infecting birds at least 82 million years ago.

That ancient bird was the precursor to all modern passerines and neoavian birds and lived during the Late Mesozoic, “back when the dinosaurs were still very much alive,” says the pseudonymous blogger GrrlScientist.

Some time around 82 million years ago, says Science News, “a hepatitis B virus infected an ancient bird and got stuck in its genome.” Normally viruses evolve really quickly. But, once its genes got stuck in the genome of the ancient bird, says GrrlScientist, the rate of change for the virus’ genes “slows to the same pace as that of the host’s DNA,” meaning that scientists looking at modern birds’ genes can see what amounts to a fossilized record of the ancient hepatitis B virus. Science News:

The reconstructed Mesozoic-era virus is remarkably similar to the hepatitis B virus that infects people today, the team found.“We’ve had 82 million years of evolution, but they have the same proteins,” says Suh, who now works at Uppsala University in Sweden.

One exception is a notorious protein called X protein. The protein has been implicated in causing liver cancer and is necessary for the virus to replicate in humans. Since X protein is missing from the hepatitis B viruses that infect modern-day birds, many scientists thought that bird viruses had lost the protein during evolution. But the ancient virus doesn’t contain X protein either, which means that the bird version probably never had it, and X marked mammalian hepatitis B viruses only recently.

So, the researchers think that birds got hepatitis B first, and then it later learned to live in mammals. In the study, the scientists say that learning about the virus’ long history can help us understand how it evolved. They also say that it could help with the “in-vitro resurrection of Mesozoic hepadnaviruses.” But maybe we can skip that part.