Chestnut-capped Piha was only discovered in 1999, but despite having a reserve dedicated to its preservation is still Endangered. Photo: Andres Cuervo (commons.wikimedia.org)

A new study, The State of the Birds in Colombia 2014 – produced by a leading conservation group in Colombia, Fundación ProAves – reports that decades of deteriorating ecosystem conditions have led to 122 of the country’s 1,903 bird species now facing extinction.

“Our findings are troubling because these deteriorating avian conditions are occurring in Colombia, an area viewed by many as perhaps the richest country for birds in the world,” said Alonso Quevedo, Executive Director of ProAves. “Of equal importance, these findings provide an important warning about threats to our water, air and other natural resources and suggest that the health of our environment has clearly diminished.” END_OF_DOCUMENT_TOKEN_TO_BE_REPLACED

Humboldt penguins remain at the zoo in Santiago, on April 4, 2013. Several dozen Humboldt penguins sun themselves along the coast of an islet in central Chile where the majestic birds coming here to nest once numbered in the thousands.

Several dozen Humboldt penguins sun themselves along the coast of an islet in central Chile where the majestic birds coming here to nest once numbered in the thousands.
Humboldt penguins—which nest only in parts of Chile and Peru—over the years have become decimated by human encroachment, rat infestations and unforgiving weather currents carried by unusually warm El Nino ocean temperatures, naturalists said.

The Pajaro Nino islet, spread across a narrow channel of water from the popular resort area of Algarrobo, once drew about 2,000 of the birds during nesting season.

Today only about 500 of the birds come to this area some 120 kilometers (75 miles) west of Santiago.

“This area used to be completely filled with penguins and birds, but over time, their numbers have diminished,” said Ruben Rojas, a local fisherman.

There are various varieties of penguins that inhabit Chile, but the largest colonies of Humboldt can be found in the northern part of the country. The birds are identifiable by the distinctive black bands across their chests.

Experts have expressed alarm over the rapidly vanishing penguins. The once plentiful species is classified in Chile as “vulnerable,” while in Peru, the birds have been labeled “endangered.”

Alejandro Simeone, director of the Department of Ecology and Biodiversity at Andres Bello University, told AFP that there are currently fewer than 50,000 Humboldt penguins left in Chile and Peru.

“A multitude of factors threaten a species that is highly diminished relative to what once existed,” Simeone said.
The beginning of their demise dates back to 1978, when the island, which is also a nature sanctuary, was joined to the mainland by a cement fill-in—a breakwater designed to protect the yachts of millionaire sailing enthusiasts.

It created in effect a 150-meter (500-foot) bridge connecting the mainland to the island, and local residents say they have seen the detrimental impact of its construction on animal and plant life.

Humboldt penguins remain at the Pajaro Nino island, in Algarrobo seaside resort, some 120 km west of Santiago, on March 6, 2013. Several dozen Humboldt penguins sun themselves along the coast of an islet in central Chile where the majestic birds coming here to nest once numbered in the thousands.

Yachters have been accused of trying to rid the region of the birds, and video footage has surfaced showing some deliberately—and illegally—destroying penguin eggs to prevent new broods.

Rojas said the yachters don’t like the excrement left behind by the birds. “They say it makes the island stink,” he explained.

Prosecutors say they are investigating the alleged destruction of the penguins’ eggs.

Part of the blame for the birds’ gradual disappearance goes to fishermen’s nets that ensnare hundreds of the birds each year.

A measure of blame also goes to the El Nino weather phenomenon and the warm water current it carries.

The frigid Humboldt current, which gives the penguin species its name, carries the birds‘ favorite foods, like anchovies and sardines.

El Nino currents, however, “warm the waters, making it hard for the penguins to find the fish that make up their usual diet,” said Guillermo Cubillos of the Santiago National Zoo.

If the El Nino warming of the waters occurs during breeding season, many of the eggs or young die of cold and hunger, because their parents are delayed or even fail to return with food.

Rats also are seen as a major culprit. The cement breakwater that connects the islet to the mainland also has given free access to rodents, which feast on the vulnerable eggs and hatchlings of the nesting penguins.

A 2012 study found that almost half of all penguin eggs on the island were devoured, primarily by rodents, within the first 12 hours of breeding period. 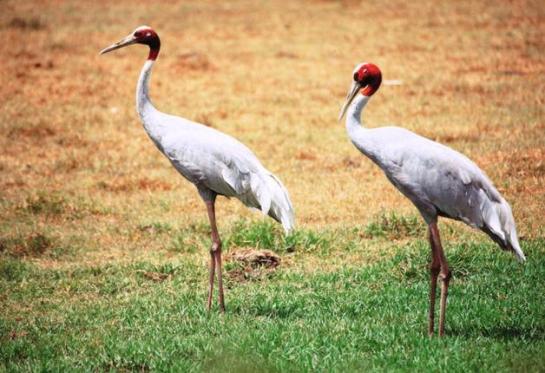 With their habitats shrinking fast to make way for the ‘green revolution’, the lanky, handsome Sarus caranes — the tallest flying birds in the world — are increasingly staring at an uncertain future. Primarily found in India, the Sarus cranes stand gracefully at six feet, towering over even the average Indian male human being. Other tallest birds — the African ostrich and Australian emu — cannot fly with their rudimentary wings.

Known for living life king size, the Sarus cranes today are on the verge of extinction in the wild as rapid expansion of agriculture is bulldozing their natural habitats. The International Union for Conservation of Nature (IUCN) has listed the bird as ‘vulnerable’ because it is suspected to have suffered a rapid population decline. This is the result of widespread reductions in the extent and quality of its marshland habitats, exploitation and the effects of pollutants. At a time when the Sarus crane population is rapidly decreasing, 14 of these endangered birds were found dead on January 15 on the outskirts of Delhi. Apart from the Sarus cranes, conservationists also found carcasses of other water birds and apparently they have been poisoned by excessive use of pesticides.

In India, the total quantity of pesticides used increased from 2.35 thousand metric tonne in 1950-51 to nearly 85,000 metric tonne in 1993-94. Today the pesticide usage is a staggering over one lakh metric tonne per annum; it is literally poisoning the ecosystem that ultimately affects the human beings who are at the apex of the food chain. Dr. S. Sandilyan of Wildlife Biology department in A.V.C College in Tamil Nadu says, “Researchers have expressed concern over the safety of the increasing use of pesticides and recommended finding effective alternatives such as bio-pesticides and bio-control. Birds play an economically significant role in agricultural environment by way of feeding on insects and also controlling weeds by consuming the seeds and preventing further invasion.”

In an unusual feat, recently a photographer from Gujarat managed to catch a large flock of 27 Sarus cranes in a single frame on February 20. India today has only about 10,000 wild Sarus cranes left, which are scattered in Uttar Pradesh, Rajasthan, Haryana, Gujarat and other areas surrounding these States.

Dr. Gopi Sundar of the International Crane Foundation (ICF) says that the Sarus used to inhabit a larger swathe of the subcontinent until just about a hundred years ago. Today, however, it’s been hunted out of Bihar, and driven out of Madhya Pradesh due to inhospitable modes of farming. In Punjab and eastern Uttar Pradesh, its numbers have dwindled due to rampant human encroachment. In Rajasthan and Gujarat, however, the picture is less bleak, with cranes finding solace along the network of canal systems.

In the early 1970s, ornithologists Dharma Kumar Singhji and Lavkumar witnessed a single congregation of 88 Sarus cranes in Gujarat. During the same period, the famous Bharatpur bird sanctuary with a mere 29 sq km area had hundreds of them surviving in its bountiful bosom. Kailash Shankala, another Indian naturalist, counted a flock of 1,400 and 1,596 in the years 1979 and 1982 respectively in Bharatpur. This year, the same bird sanctuary is woefully bereft of these birds as only two pairs were spotted here.

Of all the cranes ever sighted in India, which includes the Demoiselle crane, the Common crane, the Siberian crane (extinct in India), the Black necked crane, the Sarus crane is easily the most charming for its social skills and zeal for life. Of the 15 species of cranes found globally, six are found in India and the Sarus crane (Grusantigone) is the only resident species. [thehindu.com]